What are ordinary men willing to do to prevent violence against women and girls? Many men want to get involved and act as influences of children, other men, and institutions, but many are unsure of where to start.

The Saginaw County Men’s Campaign is made up of male leaders in our region who are working to eliminate violence against women by providing education to their inner circles at home, work, church and beyond.

The  Campaign hosts an annual Men’s Conference, bringing male leaders in the movement to our own community to help engage other men to develop and implement strategies to end abuse. 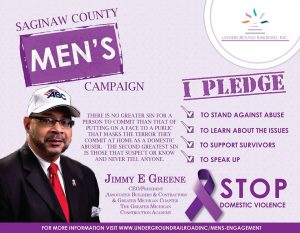 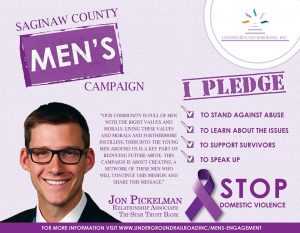 Men and boys play a critical role in helping to prevent sexual assault, domestic violence, dating violence, stalking and human trafficking.  Men can choose not to perpetrate acts of violence and challenge those men who do.  They can also challenge the ideals and attitudes that support violence against women. The #metoo and #timesup movements have gained national attention, causing a media firestorm.  Now hundreds of men are responding with #HowIWillChange.
It’s time to act – what will YOU do to end violence against women?

For more information on the Saginaw County Men’s Campaign, contact  Allie Martinez at 989-399-0007 ext. 109 or by email at amartinez@undergroundrailroadinc.org